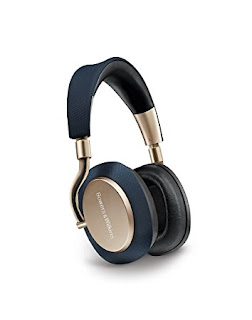 I am very impressed with the Bowers & Wilkins PX headphones.  I've tried a lot over the years and these are among the very best.  The sound is excellent, having both wired and Bluetooth connectivity is very useful, the build quality is top-class and the noise-cancelling is very effective.

You get the headphones themselves, a nice soft carry-bag, a USB-C charging and update cable and set of quick-start instructions, warranty etc.  It's all very good quality, with gold-plated plugs and good materials.   The design of the headphones is very nice, I think.  They are comfortable with a firm grip which doesn't feel too tight, so I find them comfortable for several hours use.  Note that they don’t fold up; the earcups swivel to go flat in the bag, but they do take up a bit more space than folding headphones.

Sound quality is excellent - very well balanced with extremely clear articulation.  There's a firm bass which doesn't dominate but is really strong when needed.  Middles are rich and resonant and the treble is clear and sharp with no trace of harshness and I find them an absolute pleasure.  I have listened to a lot of music through these headphones, including my Test Tracks list which goes from 16th Century choral music to London Grammar. Everything sounds very good to me. Chamber, orchestral and large choral works are clear and distinct with a lovely full sound, things like classic rock - the Rolling Stones' Gimme Shelter, for example - sound great, acoustic music has a lovely airy quality and the deep, rolling bass in London Grammar's Hey Now (one of my standard tests of headphones) is all there. Volume goes plenty loud enough for me with no distortion.

Functionally they're very good.  The Active Noise Cancelling is very effective; it has a small deleterious effect on the sound quality, but nothing much.  The controls are simple and effective and I like the automatic pause when you lift an earcup.

These are expensive headphones, but they are excellent quality with a top-class brand name behind them.  Personally, I can't fault them on anything and recommend them very warmly.
Posted by Sid Nuncius at 07:36 1 comment: 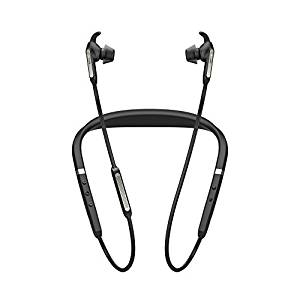 I have tried a lot of headphones and IEMs and I think these are among the best so far.  They are comfortable, easy to wear and have excellent sound quality.  (Note that these are Bluetooth only – if you need wired connection they won't be any use to you.)

The headphones come with a nice soft carry pouch, a range of tips and wings for fitting to your ears, a standard micro-USB charging cable and a very basic quick-start guide.  The guide isn't great – it doesn't even tell you how to turn them off, never mind details of the controls, but there's a good User Manual available on Jabra's website here .   They fit beautifully into the ears and sit firmly but almost unnoticeably – I've worn them for several hours without problems.

The sound is the most important thing for me and I think it is excellent in all genres.  It is extremely sharp and accurate; articulation is crisp and very clear over the whole range and there's a very good balance.  The bass is superb, I think; it is very solid and gives a full depth to instruments like a theorbo or viola da gamba (which really test bass) and in rock it is powerful but never boomy or over-dominant.  Tracks with a really deep bass like Chvrches' Leave a Trace or London Grammar's Hey Now sound great and classic rock like the Stones or The Who is fantastic while acoustic music is clear and airy.  Middles are lovely, tops are sparklingly clear without any harshness, the overall sound is a pleasure and the sheer detail audible is remarkable.

Everything works very well and the Active Noise Cancelling is really good.  It genuinely makes almost all the outside world disappear – certainly the hums, whooshes and hisses which form a background so often – and deadens sharper noises very well.

These are quite expensive, but they are very, very good.  If you're looking for a really god quality pair of Bluetooth earphones of this kind I can recommend these warmly – I'm really pleased with mine.
Posted by Sid Nuncius at 18:21 1 comment: 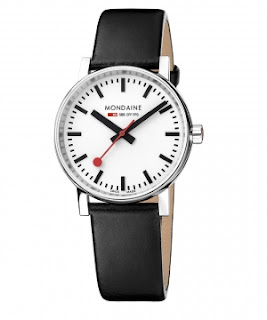 This is a very nice, good quality watch from a well respected Swiss maker.

The design is clean and simple, based on the classic Swiss railway clock.  I think it looks very stylish; there is no date function, nor any other extras and the resulting clean face looks very classy.  It's of a size which could be worn by men or women, the case is nicely rounded and is very solidly made from polished steel, with a neat little logo on the crown.  The strap is very nice black leather with a soft inside surface, making it very comfortable.  It's presented in a very nice box, so it would make a good gift.

In short, this is a stylish, classy watch.  It's expensive for a quartz movement (hence four stars from me) but it is very well made and looks really good, I think.  I'm very pleased with mine and I can recommend it.
Posted by Sid Nuncius at 07:28 1 comment: 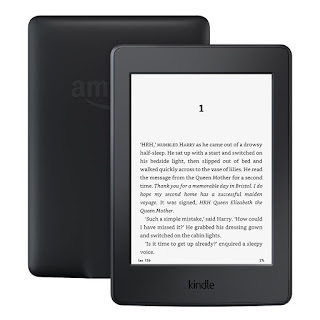 
Just to add my praise to the thousands of reviews: I'm really pleased with my Paperwhite.  Bought to replace an old Kindle Touch, the screen and new font are excellent for reading, the internal light is a really good feature, the battery lasts very well, it's light and comfortable in the hand and it's just a pleasure to use.  I'm a very happy customer.

(I paid the extra so I didn't get the "Special Offers," by the way.  I figured that as I'd be using it regularly for years, I'd regret not spending a extra few quid now to avoid constantly dealing with ads.  So far, I'm very glad I made the decision, but that's just personal preference.)
Posted by Sid Nuncius at 07:33 No comments:

Review:
Not as good as I'd hoped


The Megablast is a well made speaker, but for me it does have some serious weaknesses; principally, there is no AUX jack input and I'm not all that impressed with the sound.  The Alexa functionality is also slightly limited at this stage – it won't access Spotify, for example.  I would expect that to be updated later, although there is no guarantee.

The speaker is very nicely presented and looks great.  It is plainly very solidly made and looks stylish.  Pairing with Bluetooth was very easy and it has a very good range.  I found the Wi-Fi set-up more tricky even when I'd downloaded the app, partly because of an almost total absence of written instructions.  That may just be because I'm a bit of an old git, but I do have a fair amount of experience in speakers, wi-fi and the like.  The voice controls work well, as does the limited Alexa function.

The lack of an input jack socket is a big drawback for me.  I still carry a lot of my music on a Sansa mp3 player and I want to be able to play it through the speaker.  No chance – nor can I plug in a CD player.  This may make me a dinosaur, but a small addition of an AUX socket to make this compatible with a lot of devices still in use would make the Megablast much more useful to a lot of people.

The sound is pretty good.  It certainly goes very loud without distortion and tops and middles are good and distinct, but at the normal volumes at which I want to use it I find the bass a bit weak.  I've tested this with a lot of music in different genres and Things like Hey Now by London Grammar, Leave A Trace by Chvrches or The National's Sorrow lack that real bass resonance they really need, and a viola da gamba or the basses in choral classical music sound rather thin, for example.  In a unit at this price I'd expect better.

For me, this rates about 3.5-stars.  At the moment, with no access to Spotify along with the other reservations I have, I can't round this up to 4.  Some other reviewers like it very much, but I can only give the Megablast a pretty qualified recommendation.
Posted by Sid Nuncius at 08:05 1 comment: 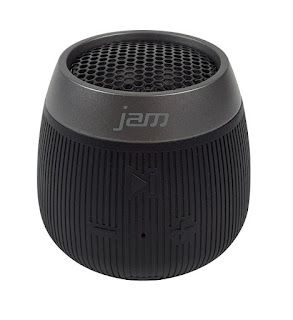 
As a small unit for under twenty quid (at the time of writing) this is a good speaker.

The speaker is very stylishly packaged and comes with just a micro-USB charging cable and a good manual. It has a good, durable feel to it and seems solidly made with a stylish look.  The AUX input and charging port are, behind a seal but easily accessible Bluetooth connection was straightforward; it is solid with a good range of at least 7m and the jack input allows connection to non-Bluetooth devices.  The controls allow you to skip forward and back, pause/play and change the volume; they all work fine.

In use, I found the sound pretty good for such a small speaker. I have listened to a lot of music through it, including my Test Playlist from Tudor choral music to London Grammar and it all sounds pretty good. The output is clear and hiss-free, the tops and middles are very good and it goes pretty loud with no distortion. The bass is not great – for a small unit at this price it's not bad, but don't expect hi-fi depth: things like the low strings in Sibelius's Karelia Suite or the deep bass in London Grammar's Hey Now get rather lost. Battery life seems to be around 4 hours and may possibly improve to the manufacturers' claimed 5 hours after a few cycles.

I think the speaker is good value at this price. It's a very nice-looking object which is well made and has decent sound as a desk or bedside speaker, for example.  Recommended.
Posted by Sid Nuncius at 09:46 No comments: 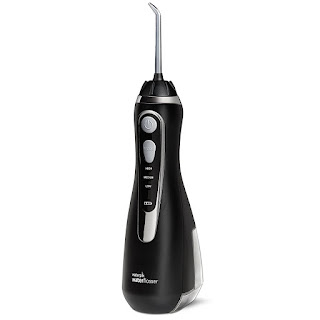 
This is a good water flosser.  It's well made and does the job, although it is, frankly, large and ugly.

I had a cheaper Chinese water flosser for a while until the charger nearly caught fire.  It had convinced me of the benefits of water flossing, though, and I'm glad to be able to try another one.  Personally, I don't find it a complete substitute for ordinary flossing; I use this in the morning and normal floss in the evening and the combination gives excellent results.

This machine is a great big thing, and it's not pretty.  However, this is necessary to get a decent sized water tank and it's designed so that despite its size it is pretty easy to use and manoeuvre into place for all my teeth.  The tank isn't quite big enough to do the whole lot in a single fill, but a quick top-up half way isn't much trouble.  It has a decent pressure although it could be a little stronger, and it leaves things feeling good and clean.

Charging is pretty quick using a very neat magnetic charger, and I find that a full charge lasts about a week using it once a day.  It's decently accessorised and seems like a well made, robust object.  I'm pleased with this and I can recommend it.